Eurasia Center is a side organization of the Sovereign Military Order of the Dragon. The goal of this organization is to foster the spiritual, cultural and geopolitical ties between Serbia and the Eurasian region. 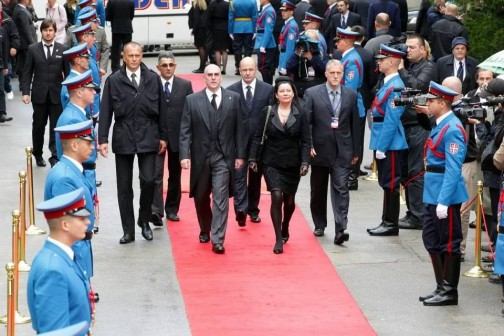 Eurasianism is a political and geopolitical theory, by which the Eurasian region has a common spiritual, cultural, political, geostrategic and historical basis. It is an organic geopolitical region, which is striving by various manifestations for its own unification. What is the definition of Eurasia? The most important archetypes that underlie Eurasia are byzantinism, turanism and the supremacy of spiritual in relation to the materialism. Byzantinism refers to the impact that the legacy of Byzantium has on the whole Eurasian region. There are two most important directions of the cultural and spiritual influence of Byzantium. One of the two is to the north-east, ie. impact on Russia. The second is to the west, ie. impact on the Balkan states. This influence, in addition to culture, was formulated with the spread of Orthodox Christianity, and with its influence on the political sphere, for example, the concepts of unanimousity and unity of the state. Turanism refers to the influence of turanian factors on the entire Eurasian region, that has been established by the conquests of Genghis Khan and his successors, such as the Golden Horde. Turanian factor brings the influence of traditions from the Far East to the Eurasian culture. The spiritual above the material is an intrinsic element of the Eurasian entity. It represents a counterpart to the Atlantistic civilization, that is the geopolitical counterpoint to Eurasianism. Atlantistic civilization is based on commerce. One of the most important features of this model of society is materialism. All the other spheres are subordinate to and shaped by the economic and mercantilist needs. In contrast, the Eurasian ethos is based on the spiritual sphere, which is above the profane, material sphere of the Universe. (Eurasian school of thought is based the works of Vernadsky, Savicky, Trubetzkoy, Badmaiev, Leonty and the other members of the Russian emigration in the twenties and thirties of the twentieth century.) Serbia represents the western wall of the Eurasian region, hence its role in the geopolitical terms is important for Eurasia. Beyond its borders, begins the Atlantistic civilization. For a good part of its early history, Serbia bordered with Byzantium and sustained the Byzantine influence in all aspects of its social life. Most importantly it accepted Orthodox Christianity from Byzantium. The influence of Byzantium to the west was created through the spiritual and cultural stamp, that was left on Serbia. Byzantism as an element of Eurasianism is most explicit precisely in the Balkans, as the westernmost zone of the Eurasian region. In addition to Serbia and Republika Srpska, Byzantium had a significant influence on Greece, Romania, Bulgaria, Montenegro and Macedonia.