The symbol of the Sovereign Military Order of the Dragon is a red dragon with a tail wrapped around its neck, and a white cross on its back, behind which is a golden Greek cross with ends of the arms shaped like a trefoil. The red and gold colors are colors of the Byzantine flag. The symbol indicates the harmony of earthly power, represented by the dragon, and of the spirituality, that is represented by the cross. The synergy of earthly power and spirit is the foundation of chivalry. The position of the dragon symbolizes constant renewal, ie. cyclic nature of events in the Universe, and the resurrection. 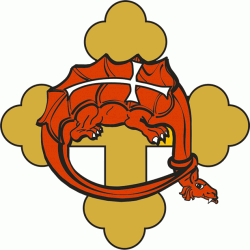 The symbol of the Order on the flag of the Order is positioned on the white-black background. The lower half of the background is white and the top is black.

On the Seal of the Order, which is of a circular shape, around the symbol of Order is, in Cyrillic, written the full name of the Order: Sovereign Military Order of the Dragon.